Funeral Customs in SA and What They Cost

Compare Guru
2016-09-20
South Africa has many cultures within its broad borders. We take a look at the different burial customs made use of by these various groups.
Death creeps up on us when we least expect it, which is why it can be so unsettling to think about preparing for the future and the cost involved. All cultures are different in how they remember and show respect for a person’s life, especially when it comes to how much it costs. Some believe a funeral should consist simply of the burial where after you leave the family to deal with the death. Whilst other cultures may believe in togetherness in their time of sorrow.

South Africa has many cultures within its broad borders, all who show their respects to the dead in different but meaningful ways.

How Some Religions Conduct a Funeral and the Costs Involved

Funerals in the Christian culture can be extremely costly and are a prime candidate for funeral cover. Costs include (but are not limited to): There is usually a week or two before the burial takes place to inform family members who may live far away. Funeral arrangements are normally facilitated by funeral homes who offer a package for the above mentioned.
The body is bought, in a casket, from the funeral parlour to the church, where the ceremony takes place. Prayers and sermons are made and songs are sung. The family members pay tribute in the form of speeches and, thereafter, the family members are given a chance to view the body.
The service is then moved to the site of the burial where a final prayer will be said and the family members are given one last chance to view the body before burial.
Mourners will then usually gather at the family home to celebrate the life of the deceased and pay their respects to the family members.

Avbob, Doves and Martin’s are all big names in the funeral and burial industry but their Websites do not indicate costs, simply funeral packages. Marius Du Plessis of Avbob says this because the range of products for funerals vary so greatly and are always tailored to fit the deceased relatives' needs. He informed that the average funeral can cost as much as R12 000 but a basic funeral service could be performed for as little as R7500. 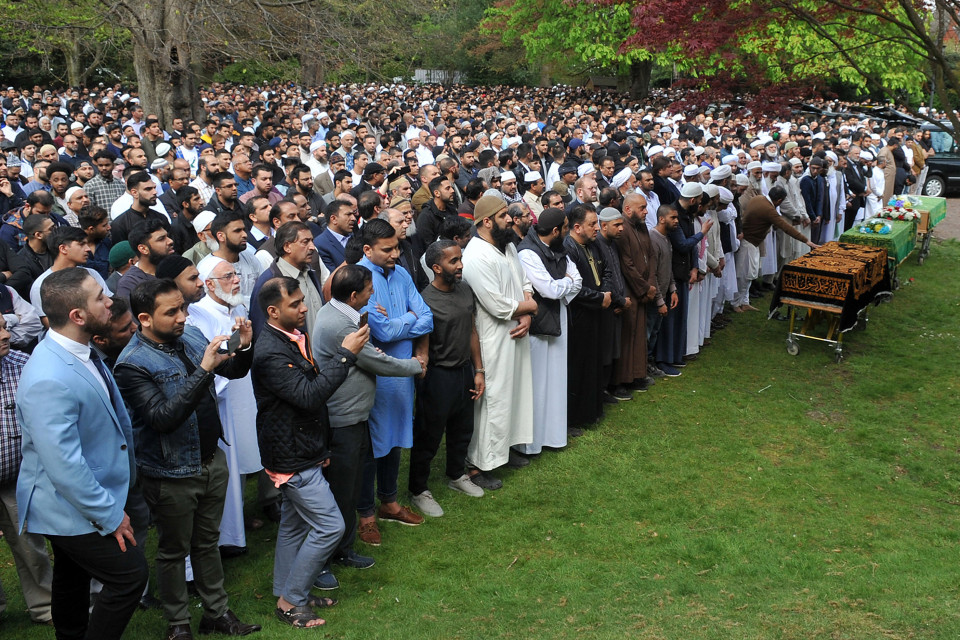 Within the Muslim community, the dead are buried immediately or as soon as possible. A local burial committee is contacted to assist with all funeral formalities. The body must be washed by specific family members, of the same gender, and then wrapped in white cloth. Men are wrapped in three plain sheets, while women are wrapped in five. Muslims are not buried in coffins, but this can be done at the family’s request. Before the body leaves the house, a congregation must ‘greet’ or ‘wake’ the body through prayer known as Salat al-Janazah. This is an Islamic funeral prayer performed in a congregation, which seeks pardon for the deceased and all Muslims. The closest male family members then carry the body out of the house and to the Hearst for transport. The body is then carried into the Mosque for the service and then out to the graveyard - usually only with the men - for burial. Last prayer is conducted and the men then return to the congregation where light meals are served. Close family will proceed to pray for the deceased for the next three days.

Costs are minimal as the burial process is very simple. A lot of the food is provided by family and members of the congregation. Or the community pitches in for the caterer. There are no cremation or undertakers within the Muslim faith either. If a post-mortem is required by law, it will be done. Muslims, however, believe the body should be given the utmost respect and autopsies are not common. Hearsts are provided by community organisations. Muslim burials usually cost between R2500 and R5000 depending on size of funeral and additional costs that may occur.

Rocks are put on top of the tombstone to indicate someone has been there. This is a well-rehearsed Jewish tradition.[/caption]   The Jewish bury their dead very similarly to the Muslims. They prefer to bury the dead as soon as possible, usually within 24 hours. The deceased is washed and covered in 'shroud' or white burial cloth. Rabbi Malcolm Matitiani, from The South African Union for Progressive Judaism, says:

“Jews bury the dead as soon as possible, based on Deuteronomy 21:22-23.  Before burial, the body is ceremonially washed with water (taharah) and wrapped in a linen shroud before being placed in a simple coffin (in Israel Jews are buried without coffins, the body is just wrapped in a shroud)."

If the family has chosen a coffin, it is unadorned to signify equality between the rich and poor. The body is never left alone, someone will sit with it between taharah and burial and will recite Psalms. The body is, however, never viewed out of respect. The funeral service takes place at the cemetery and various Psalms and prayers will be performed. Children, siblings, parents and spouses of the deceased are known as 'official mourners' and will offer up an item of their clothing before the service, as a biblical sign of mourning. After the burial, the memorial prayer is chanted and then the mourners recite the Mourners’ Prayer, known as the Kaddish. Mourners return home after the funeral and begin a week of mourning (shiva). During this period they are not allowed to go out. Community members will visit the official mourners to console and perform daily prayers.

The cost of a traditional Jewish service will vary from family to family and depend on the family's requests. Costs will include the those of moving the body, the prayer and burial service, the price of the coffin (if requested) and any additional items the family choose to honour the dead.

Why You Need Funeral Insurance

In the event of a loved one's death, a great expense is required to honour them in the way they would have wanted and one that is respectful. Funeral insurance is designed to help you access a large amount of money in a short amount of time. Many funeral insurance packages offer extremely affordable packages that are tailored to each individual and their financial circumstances. Funeral insurance also grants you the peace of mind that you have not left your family in the lurch and that they are able to honour you without the worry of the added expense.