Compare Guru
2016-09-09
LG’s V20 is the latest in its V series of premium handsets. This is what the G5 should have been, but will it sell?
Life hasn't been good at LG mobile lately. Facing stiff competition from the traditionally-strong likes of Apple and Samsung, as well as lower costing, well-designed and well-performing handsets from Chinese upstarts (Xiaomi, Huawei and ZTE). LG Electronics' mobile division has been under tremendous pressure to produce a handset that will sell well. The modular-styled G5 device failed to make much of an impact,after its launch earlier this year.

In an effort to boost sales, and remind the world that they do indeed make great phones, LG Electronics has unveiled the V20. This its latest in its V series of smartphones. The V20 boasts new features including: It is also the world’s first smartphone to come preloaded with Android 7.0 Nougat OS. This as well as the new Google In Apps phone search function. 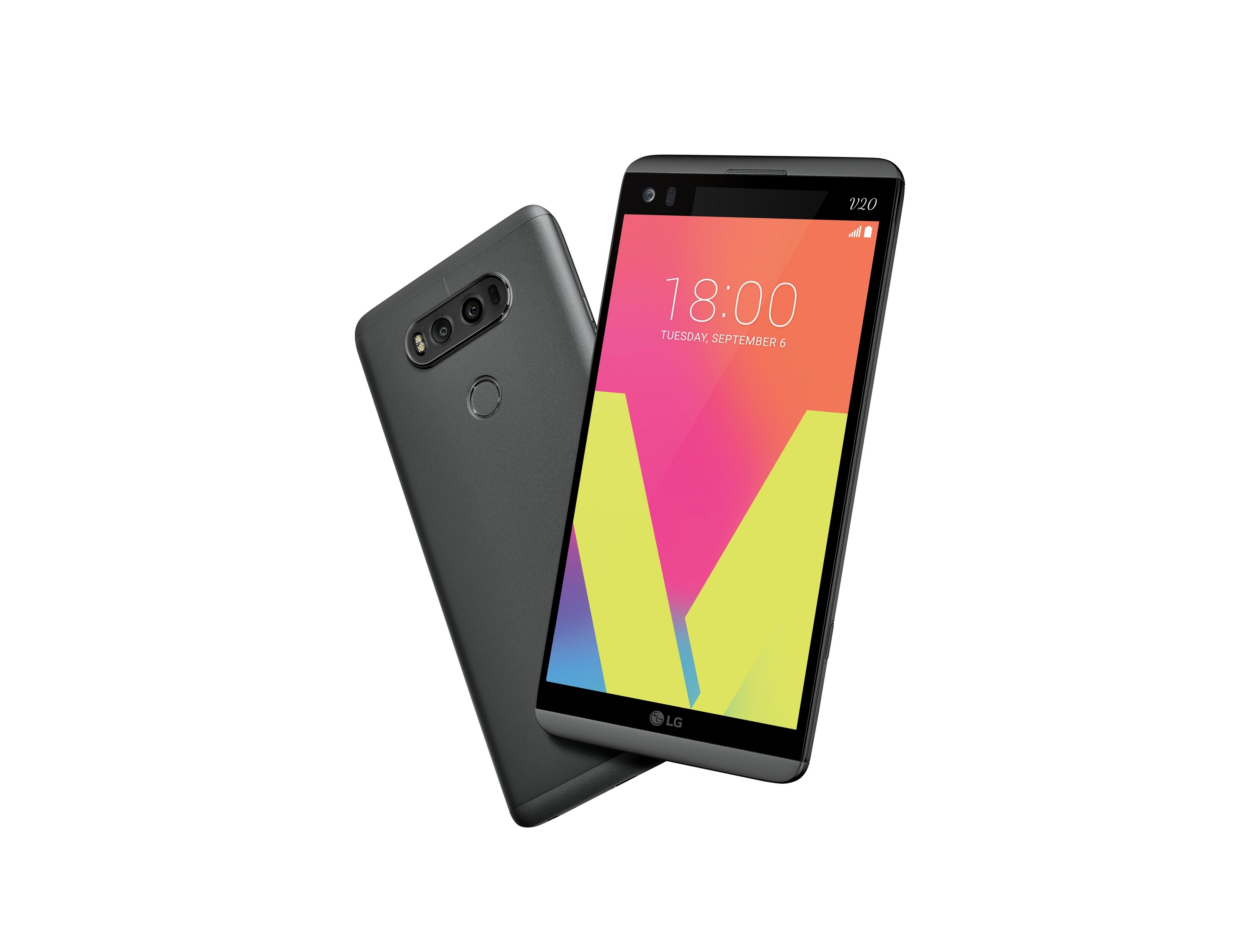 Steady Record 2.0 The LG V20, powered by the Qualcomm Snapdragon 820 processor with X12 LTE, introduces Steady Record 2.0. Leveraging Qualcomm Technologies’ electronic image stabilisation (EIS) 3.0 to record sharper video footage while neutralising shaky images. The gyro-based EIS improves sync accuracy between the image and the gyro by reducing sync latency to only 50 milliseconds. EIS is complemented by digital image stabilisation (DIS). This further improves video quality in post-processing by adjusting objects across frames and minimising distortion, caused by a rolling shutter, for smoother action. When shooting videos on your phone, you can say goodbye to shaky hands. Hi-Fi Video Recording

LG V20 owners can record Hi-Fi videos and manually control the settings for perfect audio quality. This can be achieved by using options such as the Low Cut Filter (LCF), which removes unwanted background noise and Limiter (LMT), that sets recording distance. The LCF reduces background noise while the LMT zeroes in on voices the user wants to record. The V20 also captures audio using 24-bit / 48 kHz Linear Pulse Code Modulation (LPCM). This is the same format used in professional video equipment.

Hi-Fi Quad DAC .Clearly on the opposite end of the smartphone pool to Apple (who have just announced the iPhone 7 with NO headphone jack), the V20 is the world’s first smartphone to feature a 32-bit Hi-Fi Quad DAC. Powered by ESS SABRE ES9218, the Quad DAC in the V20 delivers clearer sound by minimising distortion and ambient noise by up to 50 percent. With 75-stage fine volume and L/R balance controls, as well as support for lossless music formats including FLAC, DSD, AIFF and ALAC, the V20 delivers high-quality sound to any pair of earphones. HD Audio Recorder The HD Audio Recorder represents the next level of sound recording. This feature lets users capture studio quality audio with a wider dynamic frequency range. This is achieved using three high AOP microphones to record incredible sound that surpasses audio recordings on conventional smartphones. With Studio Mode, you can manually control sound with easy-to-use keys similar to ones found in video cameras. Use Music Recorded to create high quality audio suitable for auditions by recording singing voices over existing music. In an effort to further enhance audio functions and design, LG continues its collaboration with B&O PLAY. The result in the LG V20 is a natural, balanced sound, reflecting B&O PLAY’s acoustic engineering philosophy.

Capture It All and More

Front/Rear Wide Angle Lens The wide angle capabilities of the front and rear cameras capture photos with an inclusive background. Meaning users get more in the frame and leave nothing out. The 5MP front camera with a 120-degree lens expands the selfie experience to take bigger pictures with even more friends. The 8MP rear camera with its 135-degree lens is perfect for taking pictures in front of a gorgeous vista or inside a gigantic stadium. The large aperture standard angle lens captures sharp images at a maximum of 16MP with its 75-degree lens. Auto Shot The Auto Shot Function on the front camera produces perfect selfies. With its face detection feature, the camera triggers the shot when the subject is ready and smiling. There is no need to press the shutter button, which usually increases camera shake and the likelihood of a blurred shot. Hybrid Auto Focus The V20’s Hybrid Auto Focus (HAF) ensures a sharp picture every time. A fast and stable auto focus is delivered in any environment by integrating three AF mechanisms. These are Laser Detection AF, Phase Detection AF and Contrast AF, for both videos and photos. The V20 determines if LDAF or PDAF is best for a particular shot, then refines the focus with Contrast AF. Users can take full advantage of the V20 when capturing images of friends or family in action, in any lighting conditions.

Gives You More of What You Love

Second Screen The popular Second Screen feature, that was first introduced on the V10, has improved in visibility. With double the brightness and 50 percent larger font size compared to the V10, the smaller display located above the main display allows users to easily view notifications and alerts in outdoor situations at a glance. Now with the Expandable Notifications feature, users can tap a button on the Second Screen to enlarge notifications. With this, they can check long messages at a glance and quickly send a reply or share information. LG UX 5.0+ The LG V20 comes with the mobile user interface LG UX 5.0+ to make it easier to use the multimedia functions tailored to customer needs. The LG UX 5.0+ is an upgraded version of the LG UX 5.0 first introduced on the LG G5. It is also the world’s first smartphone interface to run on Android 7.0 Nougat. The LG V20 also features Multi-window to display two apps at once in a split screen. Users can drag text, images, and files from one app to another. The combination of these advancements, together with the 5.7-inch main IPS Quantum Display, offers the best in multitasking capabilities. In Apps The LG V20 is the world’s first phone to showcase Google’s In Apps. The new search mode featured in the Google app, helps users find content. Not only from built-in apps including contacts, emails, text messages and photos, but also from user-installed apps. It also enables users to discover recently accessed apps, people to get in touch with, messages to read, or activity across apps without having to type a query. 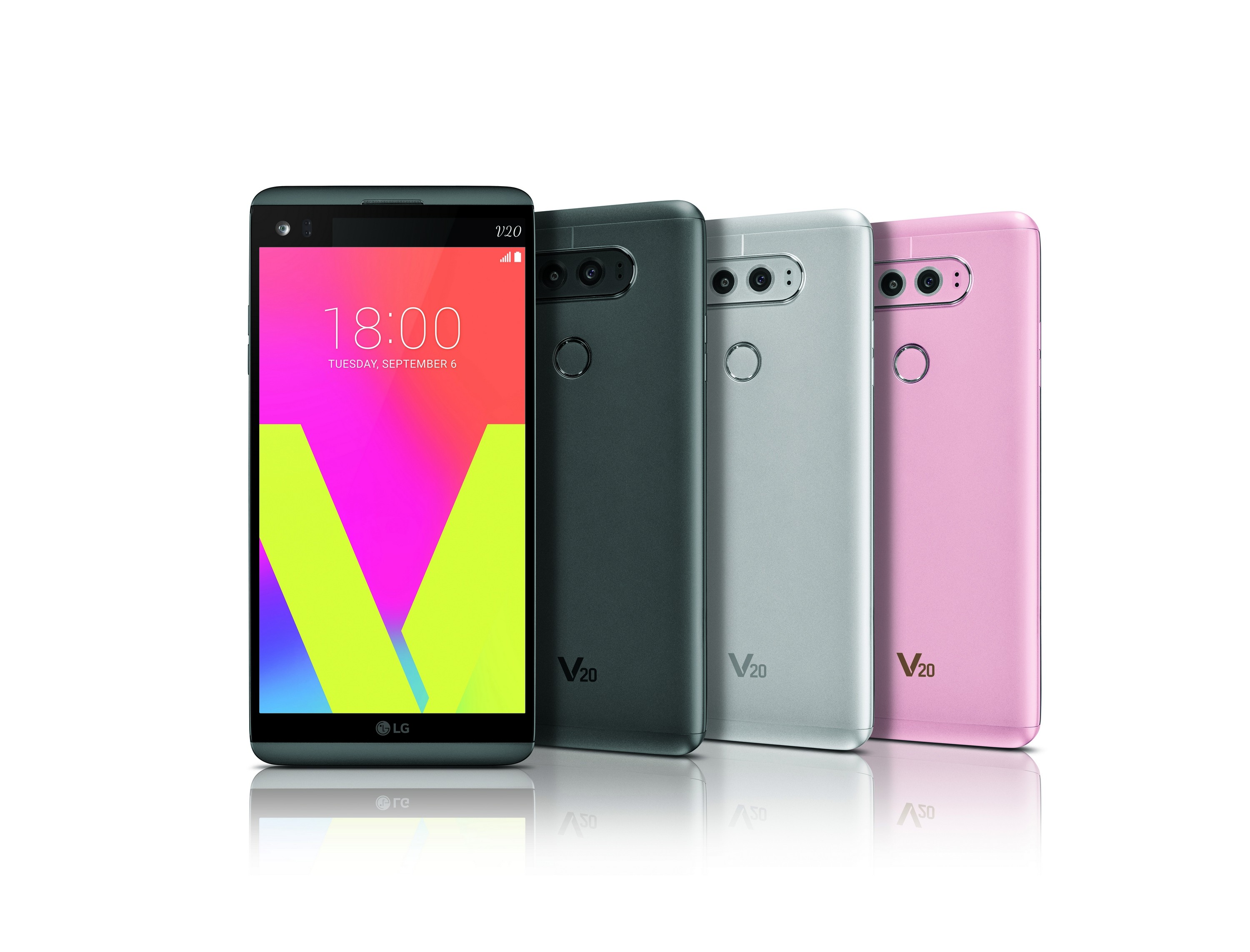 Premium Design in a Durable Body

Premium Materials To achieve both a sophisticated look and solid durability, LG uses lightweight aluminium, together with a new silicon-based material. AL6013 metal, found in aircrafts, sailboats and mountain bikes, was selected to cover the back of the phone due to its sturdy but light properties. If dropped, the top and bottom of the phone are protected from damage by Silicone Polycarbonate (Si-PC). This innovative material, found in helmets, reduces shocks by more than 20 percent compared to conventional materials. Durability The LG V20 has also passed the MIL-STD 810G Transit Drop Test for durability, conducted by an independent laboratory that conforms to U.S. military standards. The test determined that the V20 could withstand shocks and still function. This when dropped repeatedly from a height of four feet and landing in various positions, including the front, back, sides and corners. “The LG V20 is designed to offer customers a more dynamic experience by building on the most popular video and audio features of the V series,” said Juno Cho, president of LG Electronics and Mobile Communications Company. “With the LG V20, we are giving our customers more of everything they love and less of anything they don’t need to set a new standard for premium smartphones.” The LG V20 will be available in Korea starting this month followed by other regions. In the weeks to come, information will be locally announced regarding other markets and launch dates. Key Specifications:

Need a new phone? Let the Guru help you find the best deals.