See The World In 360 Degrees

Compare Guru
2016-10-17
360 degree photos and videos are all the rage at the moment. Here are three of the best 360 degree cameras available in South Africa.
Virtual reality might be the big buzzword in video and gaming, but how dow you create immersive content without paying a fortune for a specialised camera? We've rounded up some of the best 360 cameras currently available in South Africa. You can use these to take 360 pictures and/or video! 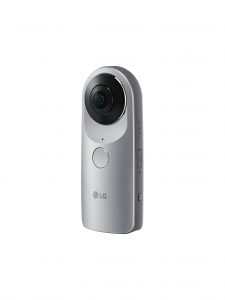 The LG 360 Cam is a compact 360-degree angle camera equipped with two 13MP 200-degree wide angle cameras, 1,200mAh battery and 4GB internal memory. All of which can be supplemented by a microSD card. What this means is that the 360 Cam can easily be connected to your smartphone, allowing you to create 360-degree content. The LG 360 Cam provides 2K video and 5.1 surround channel recording on three microphones. LG has also secured a partnership with Google. This allows for images taken with the 360 CAM to be uploaded to Google Street View and YouTube360. 360 photos can, of course, also be viewed on Facebook. The 360 Cam is compact and lightweight standing at 30 x 97 x 25mm and weighs 72 grams. There are two 13-megapixel cameras mounted back-to-back on the LG 360 Cam. Each camera has a lens offering a 200-degree field of view, meaning that each side can capture 180-degrees. When used together, these are stitched for the full 360 degree view. LG has created a 360 Cam Manager app, which lets you to control the camera remotely (provided that you're in bluetooth range) and switch between taking 180-degree and 360-degree pictures or videos. Cost: R3 199 (Takealot.com). 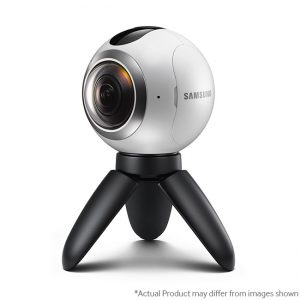 The Samsung Gear 360 is equipped with dual fisheye lenses, which both have 15 megapixel image sensors. This gives you the ability to capture a high-resolution (3840x1920) 360-degree video that also supports 30 megapixel still images. You can also shoot a 180-degree wide angle video and images with only using one side of the camera lens. Built for any time of day, Gear 360 offers Bright Lens F2.0. This creates high-resolution images even in low-light conditions, where users can create full panoramic videos. The Gear 360 has a spherical design, unlike the other 360 cameras on this list. According to Samsung, this "maximises portability to film on the go or for indoor activities". While it certainly is portable, the spherical shape doesn't lend itself to putting the gear 360 into your pocket. Without a cover, you're always wondering whether or not the lenses will get scratched. One advantage of the Gear 360 is that it features a user-friendly tripod and has a wide range of accessories that it is compatible with. Like the LG 360 Cam, the Gear 360 also allows you to share content to Google Street View. Gear 360 is compatible with select Samsung smartphones including the Galaxy S7 and Galaxy S7 edge, Galaxy S6 edge+, Galaxy Note 5, Galaxy S6 edge, and Galaxy S6. Cost: R6 999 (Samsung Brand Store).

Theta S is a lightweight portable camera, slightly larger than a 3G/LTE dongle. It can capture images of up to 14MP in 360 degrees. The Theta S contains an enlarged image sensor and F2.0 lens which allows more light to enter into its ultra-small twin-lens to capture images in low light.

The app gives people control over ISO, aperture, and f-stop. Video can also be edited in products such as Adobe Premiere to maximise expressive integrity.

“The camera is simple to operate and comfortable to use, has 8GB of storage capacity that holds up to 1600 photos at maximum resolution and about an hour of video. It has a shutter release on the side of the camera or, more frequently used, the camera’s connected to an app on your smartphone and you can trigger it from there,” says Esti Kilian, GM of Marketing Services at Ricoh SA.

Theta S is based on the Google-supported Open Spherical Camera application programming interface (API), so it is compatible with Google devices. Images and footage can be directly uploaded to various social media platforms such as Facebook, Twitter, and Tumblr, Google Maps, Google+, and YouTube’s 360-degree channel. It is also compatible with Google Street View so you can upload your own images to the service.