Compare Guru
2016-10-31
We are all well aware about the energy crisis we face. Here is Elon Musk’s latest initiative to combat climate change.
The world currently consumes 20kWh of energy annually. At least that's what Tesla says.

Global warming - which is a gradual increase in the overall temperature of the earth's atmosphere - is on the rise. This phenomenon is commonly attributed to the greenhouse effect, which is caused by increasing levels of CO2, CFCs and other pollutants. Fossil fuels (such as coal) remain the dominant form of energy utilised across the globe. Furthermore, energy use accounts for more than two thirds of the GHG emissions addressed by the Kyoto Protocol. With such alarming stats, one has to wonder why more people, and countries, are not turning towards renewable energy sources. Tesla says that there are three key components which can help address climate change and have a positive impact on the world: These solutions already exist independently but, when combined, they become even more powerful.

In an effort to address these issues, Tesla has already created electric cars, a Powerwall and now they've introduced a Solar Roof. 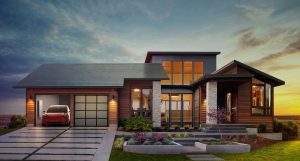 When you think of solar powered homes, the image that comes to mind is one of ugly black panels on a roof. It might not be a deal breaker, if you're serious about solar power. But it certainly wouldn't hurt if solar panels were more attractive. Tesla's partnership with SolarCity aims to change all of that. The Tesla and SolarCity solar roof is a complete roof that is beautiful, durable, and brings renewable electricity production to any home or business. When Tesla and SolarCity embarked to design and engineer the solar roof together, the goal was to create the most beautiful and efficient roof ever. One that would make homes look better, while reducing the cost of electricity. The solar roof consists of uniquely designed glass tiles - available in four different architectural styles. These complement the aesthetics of any home, and are embedded with the highest efficiency photovoltaic cells. According to the company, the tiles are infinitely customisable for a variety of different home styles (Tuscan, slate, smooth, and textured). Each uniquely engineered so that the photovoltaic cells are invisible. [gallery size="full" columns="4" ids="15520,15521,15522,15523"]   The idea is that you'll be able to choose which sections of your roof will contain the hidden solar technology, while still having the entire roof look the same. These new roofs will seamlessly, and beautifully, supply renewable energy to homes, battery storage systems, and back into the grid, creating savings for owners. When combined with Tesla Powerwall, the solar roof can power an entire home with 100% renewable energy. All of this sounds amazing, and it would be an ideal product for South Africa. We don't yet know, however, the cost of these solar tiles and whether or not they'll actually reach our shores.