Fight the Fat with Healthy Alternatives to Fast Food

Jason Snyman
2017-10-19
The top fast food restaurants in SA may be your favourites, but are they good for you? Definitely not. We offer truly healthy alternatives.
Half of South Africans are overweight or obese. That’s according to 2017’s Discovery Vitality ObeCity Index. The study offers insight into the weight status and food purchasing behaviour of half a million Vitality members across six South African cities. These covered Johannesburg, Pretoria, Cape Town, Durban, Bloemfontein and Port Elizabeth. [caption id="attachment_28586" align="aligncenter" width="700"] 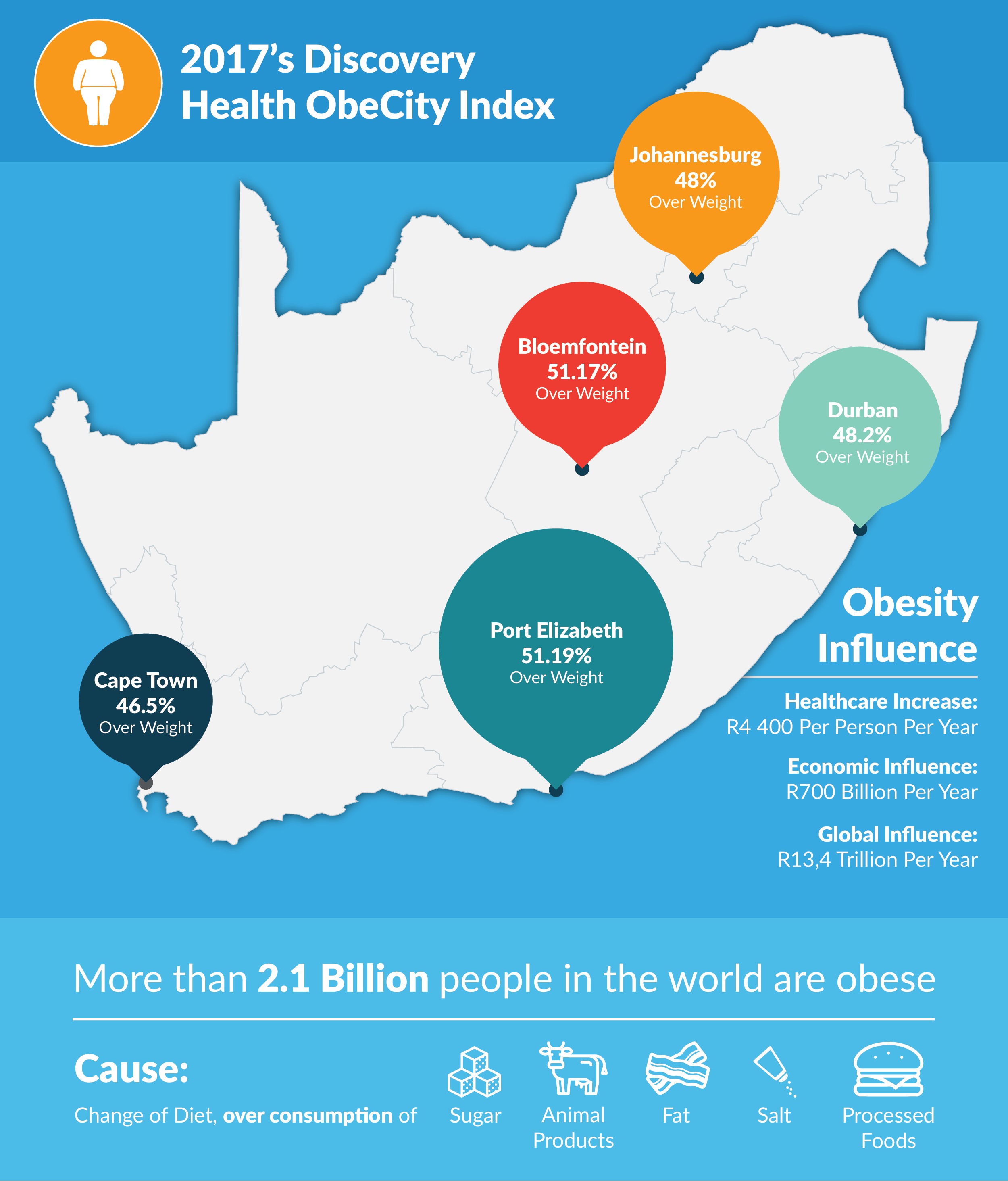 According to the study, Cape Town is the healthiest city. 53.5% of Vitality members have a normal weight status. Johannesburg came in second, with 52% and Durban placed third with 51.8%. The worst cities were PE and Bloemfontein, with less than half the residents having a healthy weight status.[/caption]   According to the study, Capetonians also purchase more fruit and vegetables, compared to other cities. PE, coupled with Durban, also purchased the least amount of fresh fruit and veg. As put forth in the study, the impact of obesity in our country is not only visible in the health of individuals, but in our economy, too. The direct healthcare cost of obesity is well-documented. Obesity can increase healthcare costs by almost R4 400 per person, per year. Globally, the cost of obesity amounts to R13, 4 trillion – which is just about the cost of war. More than 2.1 billion people in the world are obese, with the percentage growing. While obesity is a complicated issue, the biggest cause of the epidemic is a change in diet. Our consumption of sugar, salt, fat, animal products and processed foods has reached fever pitch. As we slowly kill ourselves, our appetite for unhealthy food grows day by day. In light of these studies, we took a look at the Top 10 fast food restaurants in SA, as recently revealed by market research agency, Kantar TNS. 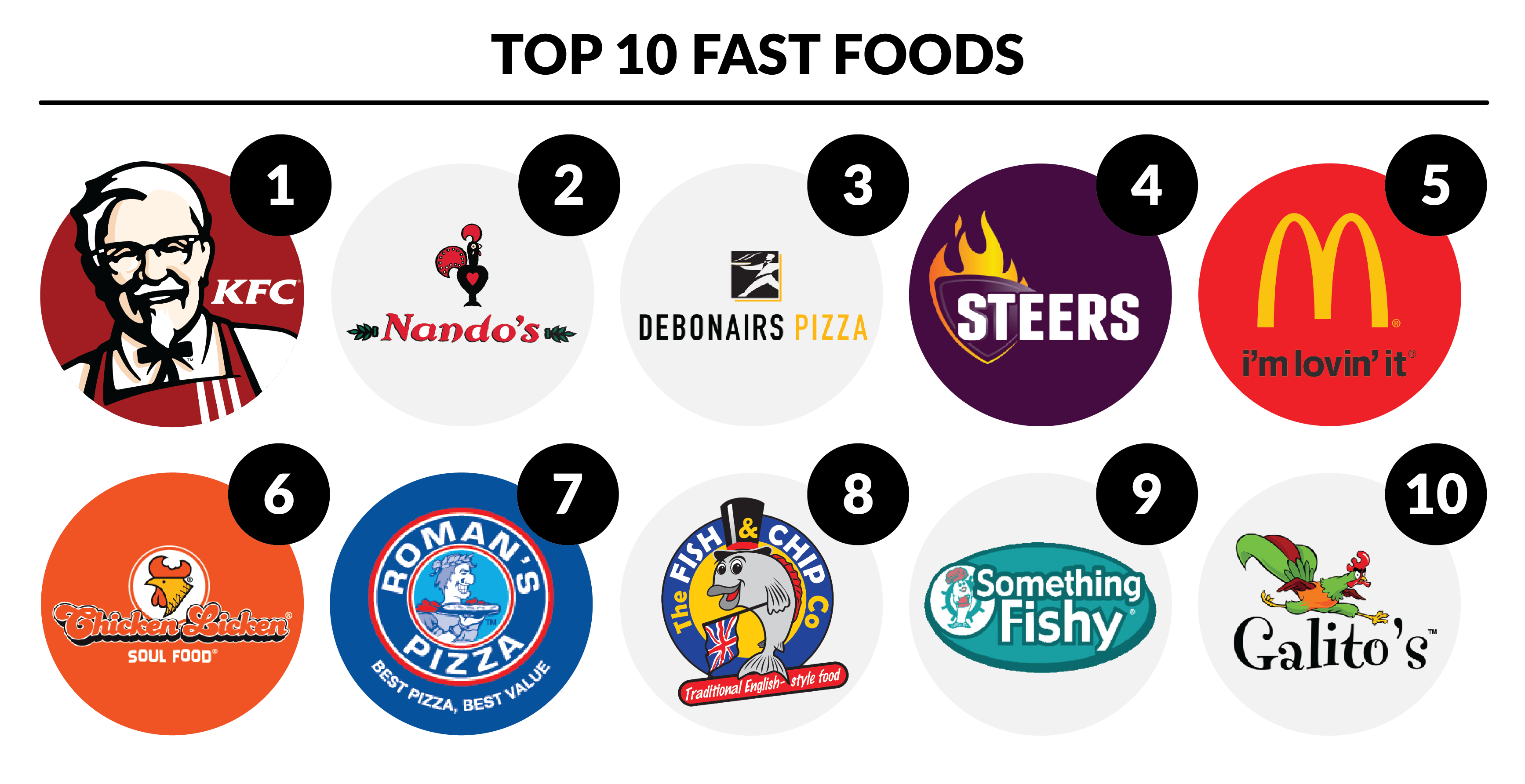 And because nothing will ever be healthier than home cooking, our pals at UCOOK were nice enough to give us some healthy alternatives.

SAVE up to 35% on your car insurance today!

KFC, formerly Kentucky Fried Chicken, was voted the most loved brand of fast food in SA. “This is wonderful,” said KFC marketing manager, Jacques Cronje. “It means we are doing the right things – things that are resonating with consumers.” There’s no denying the brand presence and popularity of KFC, or any of the brands who made the Top 10. Likewise, why we flock to them is no big secret. Simply put, we’ve been conditioned, brainwashed, bombarded and poisoned. And also, fried chicken is damn delicious. Another factor is convenience. Almost every city in the world has a McDonald’s within 10 minute’s drive. Thanks for having terrible impulse control, brain. Just the smell of that golden, crispy KFC chicken is enough to drive most people crazy. It has also been proven that we prefer branding, and we tend to associate food with memories. These fast food chains know all about our weaknesses and capitalize on them. Our brains, through evolution, have naturally been wired to prefer high-calorie food. Any planet, though, which invented the Chizza, or a Meaty Triple-Decker Pizza is surely deserving of a collision with an asteroid. 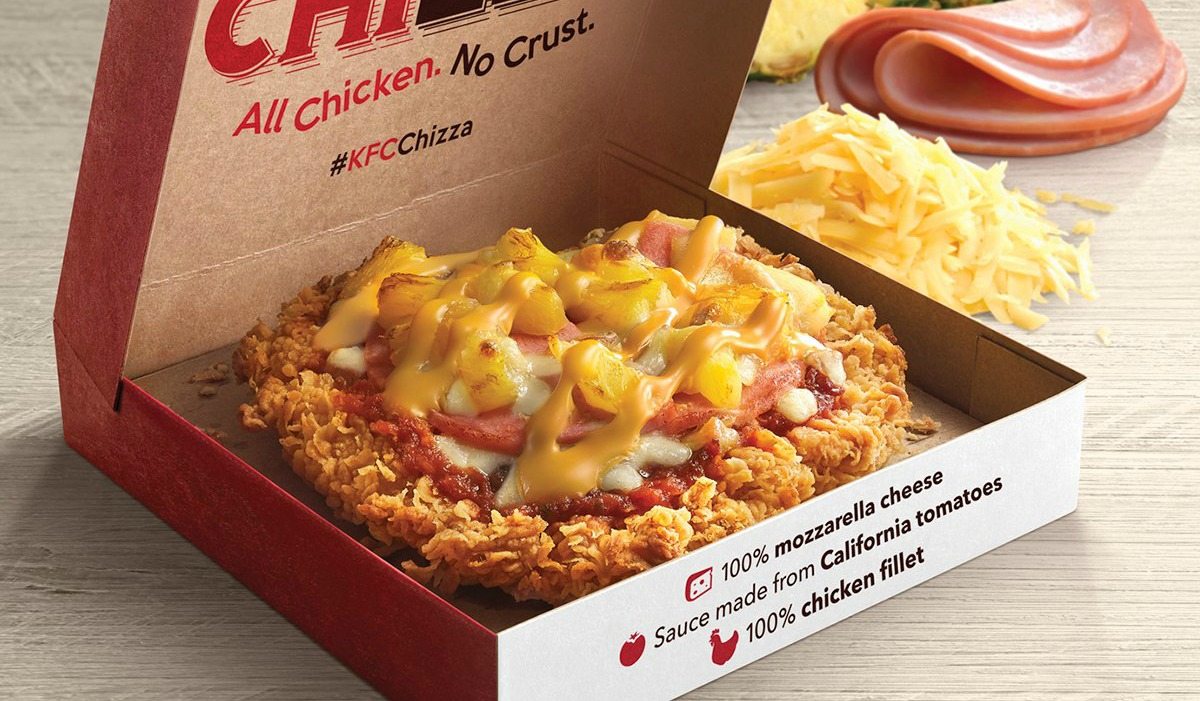 Fast food is loaded with sugar, fat, MSG, casein and salt. They’re pumped full of preservatives, flavour enhancers and colourings to make them attractive and edible. Our brains crave these addictive things. We’re not going to go into detail why KFC or any of the Top 10 fast food brands are terrifically bad for you. The rumours and urban legends surrounding all of them are well documented and should be enough to keep most people away. But, if you absolutely must support them, they all offer ‘healthy’ meals.

The evidence of a looming health crisis in South Africa is clear. The female population, in particularly, appears to be the hardest hit, with 45% of women severely obese. In comparison, 15% of men are suffering from obesity. According to the Vitality ObeCity index, 11,6 million global deaths are attributed to dietary risk factors. This is compared to 7,1 million deaths attributed to smoking and 3,2 million deaths attributed to alcohol and drug abuse. You would think that fat, across the board, would be the unhealthiest component. It’s the sodium, however, which is the real killer. Linked with high blood pressure, kidney disease and even toxicity leading to Alzheimer’s disease – sodium is one to avoid. Ultra-processed foods have been on the rise for a long time, also contributing to our deteriorating health. People, for the most part, do believe in healthy eating. According to the ObeCity index, 96% of those involved with the survey agreed that eating healthy is extremely important. The problem is, we just can’t seem to break away from our fast food. It’s convenient, relatively inexpensive and tasty. A lot of people, in an effort to be healthy – but still craving fast food, opt for the ‘healthier’ options on the menu. These could include a McDonald’s salad or Veggie Burger, or a grilled chicken burger from KFC. You could have a quarter chicken at Nando’s or a small vegetarian pizza at Debonairs or Roman’s. Hold the fries and the salad dressing. However, a study was done - albeit a good couple of years ago - suggesting that these 'healthy' fast-food options have the same effect on your cardiovascular system as the regular meals. So, in essence, the only way to truly eat healthy is to stay away from them altogether.

It’s worth pointing out the obvious, though. If you’re not going to be indulging in heart-attack inducing fast food, you may as well be making your own food at home. We spoke to UCOOK - who we mentioned a while ago in our Favourite Foodie Box article. UCOOK's menu changes every week, with options in Healthy, Easy and Vegetarian categories. They were nice enough to share some of their delicious recipes with us. These are real, healthy alternatives to fast food which you can make at home. If you like them, which we're 100% sure you will, have a look at this week's delicious menu. Let's tuck in. 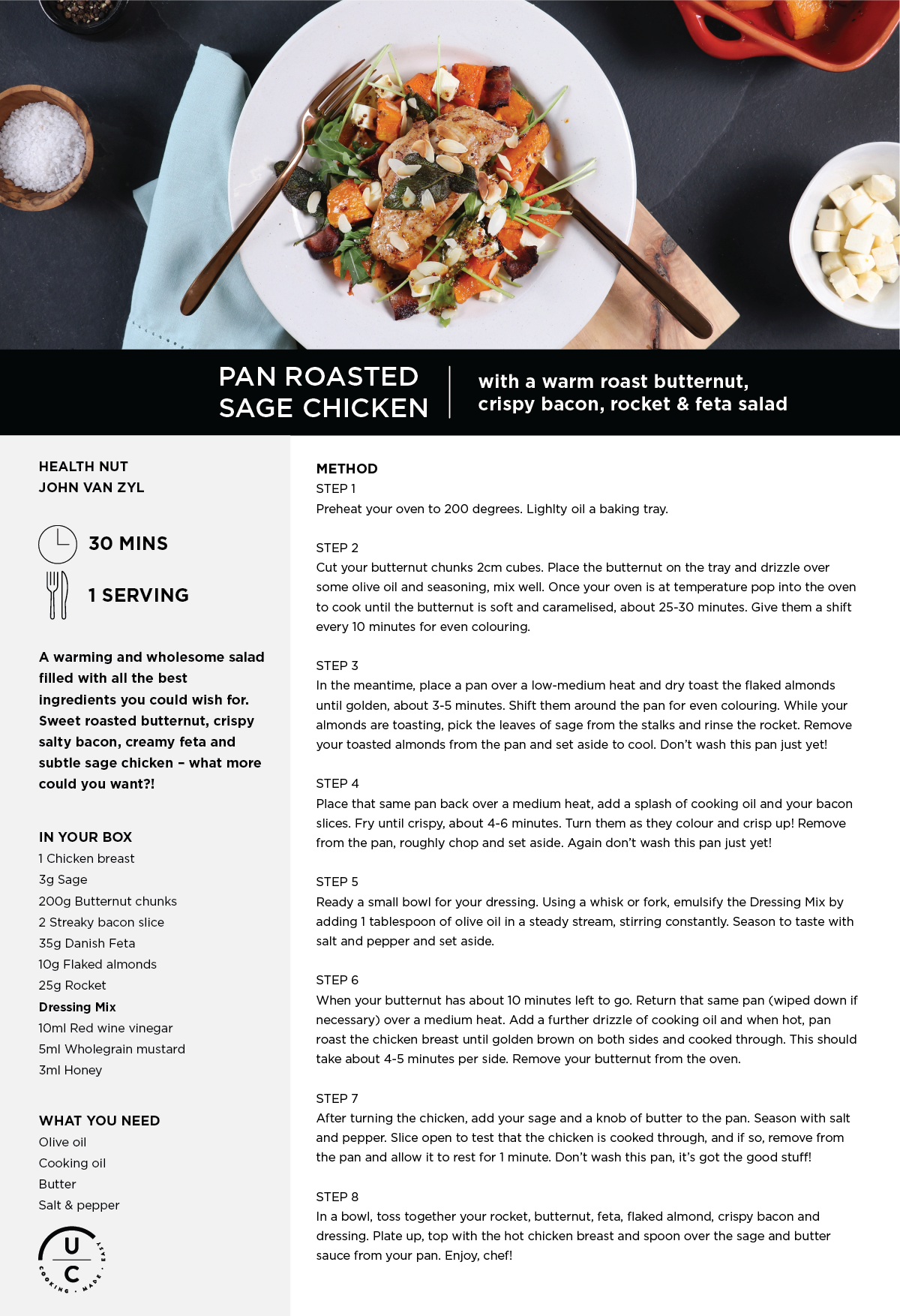 Give Debonairs and Roman's a rest, try UCOOK's Dreamy Pizza: 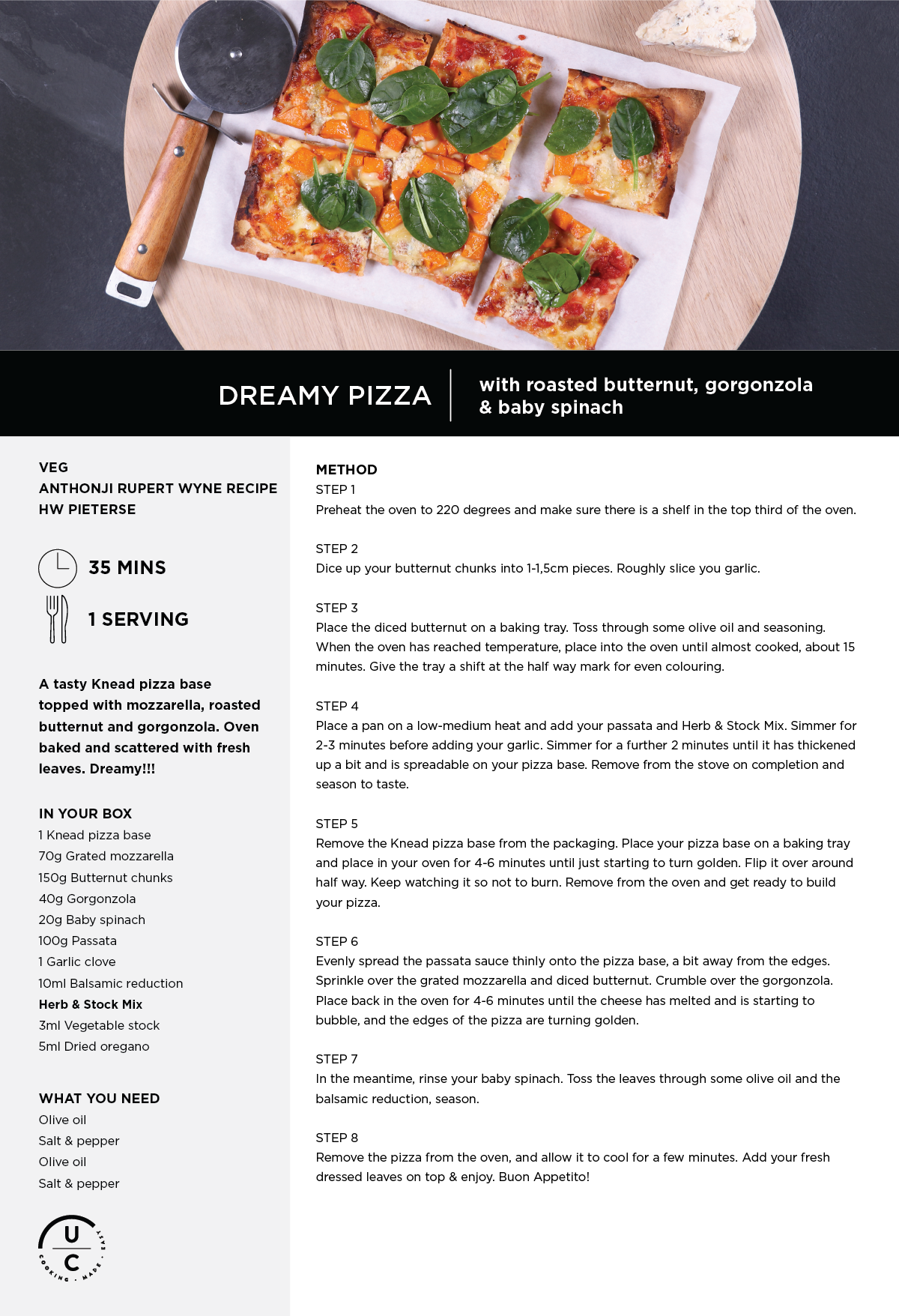 Instead of Steers or McDonald's, try UCOOK's Bun-less Burger with Sweet Potato Fries: 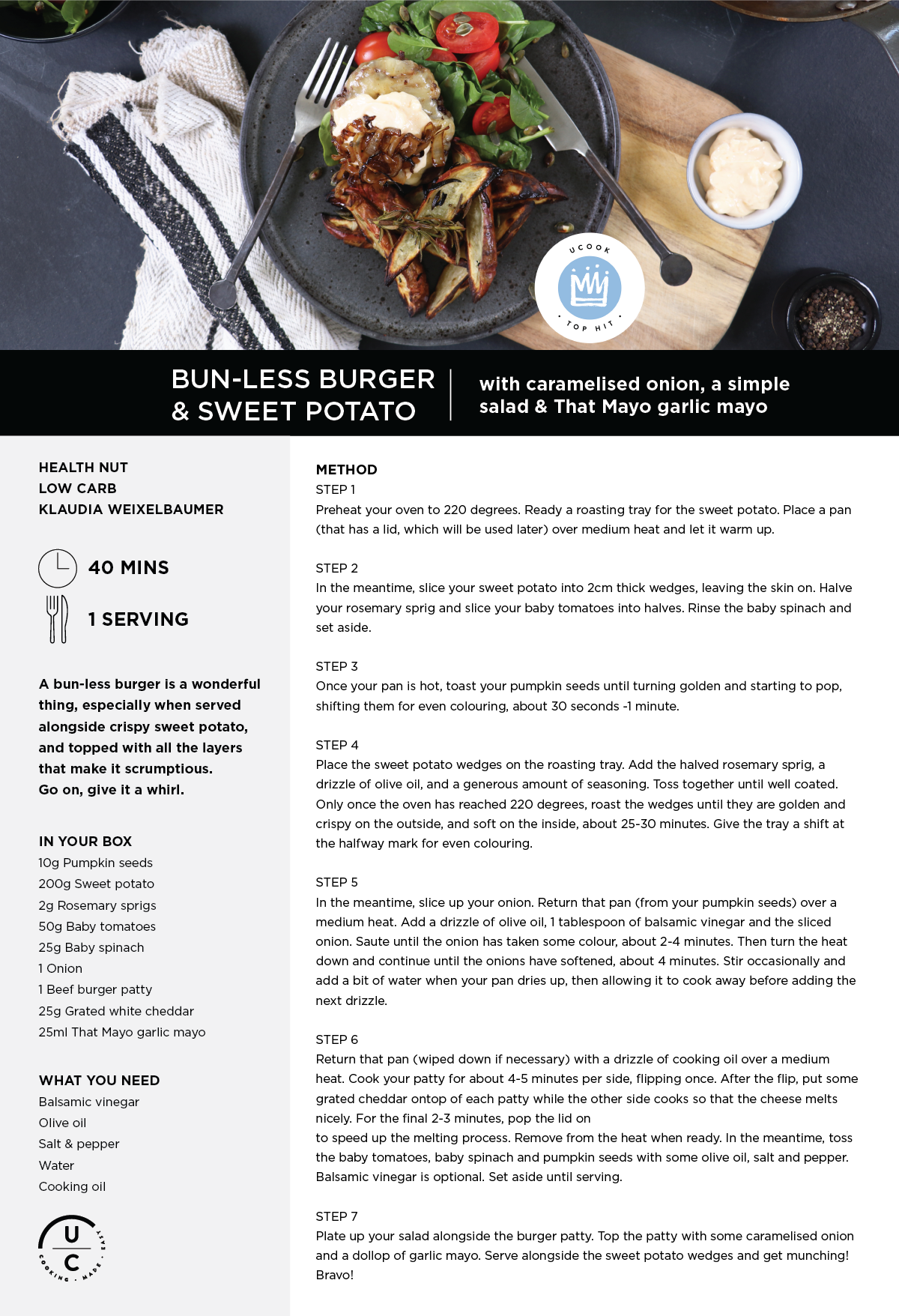 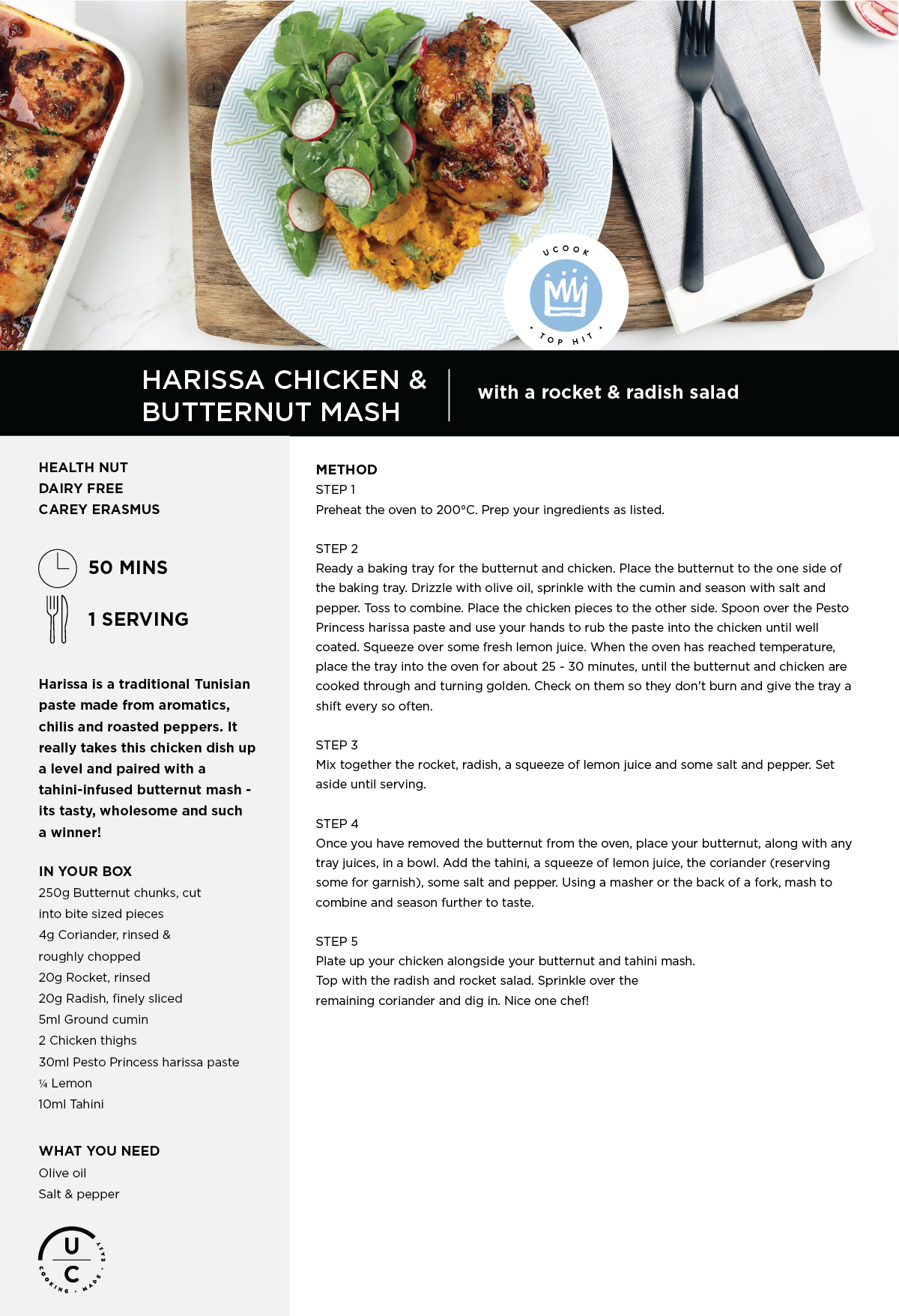 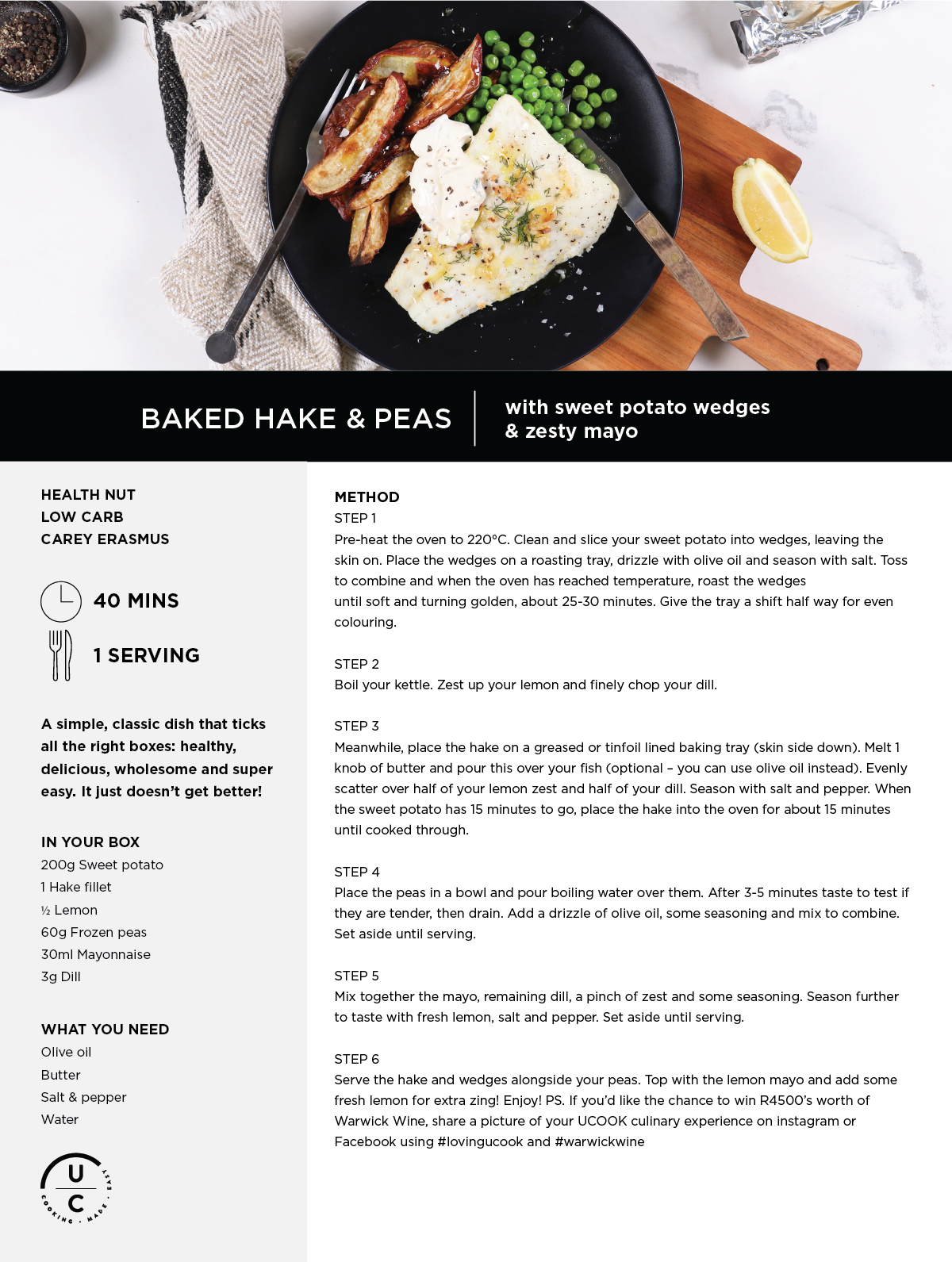